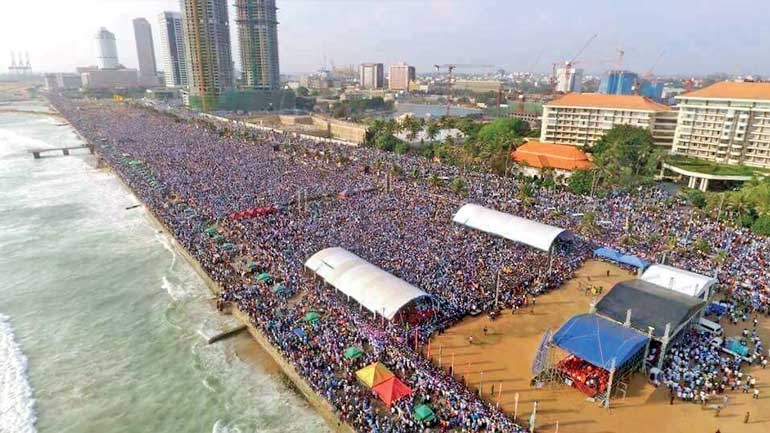 In marketing, we work on a model that if we increase the Share of Voice (SOV) in the market place by increasing the marketing spend, it will have a direct link to the Share of Mind (SOM) of the target consumer group and this in turn will drive behaviour change among consumers that will lead to share of market.

This model works on the premise that the other variables that impact behaviour are somewhat similar in nature such as product attributes, pricing strategies, availability of the product and the background of the company for instance.

Case in point – US

If I go back to the 2016 US elections, it was a dead heat at a 44% share of both candidates and it was clear that Clinton would pull through. In fact technically brand Clinton won with a higher number of votes but due to the electoral voter system the second brand came into office. If the latter was not in play it was a classic case study of SOV = SOM = Market share in my view.

If this analogy is extrapolated to Sri Lanka, the 1 May crowd pull indicated that brand Mahinda had a higher share of market than brand Maithri or brand Ranil. From the architecture that was at play one can also infer that Share of Voice (expenditure) may have been higher by brand Mahinda in relation to the other two brands even though the latter two are in the Government in power which is strange purely from an academic point of view.

What is important now is understand the logic behind the turnover on 1 May and also understand the passion that came out from the event to moving consumer behaviour, consumer meaning the general voter public.

Especially when it comes to a political campaigns the essence of strong strategy is a research-driven action – the ability to convert insight about a customer and competitors into a superior strategic position and a plan that persuades voters to choose a specific candidate. Now the challenge is how each of the campaigns understands the hidden nuances and then converts this insight to strategy in the next two years.

The brand Mahinda camp threw out a challenge to starve the provincial council elections and the same result of the May Day rally can be repeated whilst Ranil promised Sri Lanka to be renewed with strong global partnership for development. The final decision will lie with the general public that is currently challenged with economic issues.

The educated voter is aware that the previous regime actioned a vision that has resulted in heavy debt servicing, that is now hitting the taxpayer as per the IMF guidelines. In this background a key question asked by many is, is it right to market a political candidate to high office like a washing powder or a toilet soap? Isn’t it an ultimate indignity to the democratic process of a country where the general public can be influenced with a SOV = SOM = Market share equation?

The answer has been challenged by many on an ethical front but the reality is that marketing drives voter behaviour and be it right or wrong the party that does a better job on this equation will become the choice selected, be it in Sri Lanka or anywhere in the world.

Let me go back to the basics. Let’s simply understand what marketing means. The Chartered Institute of Marketing defines marketing as a management process that identifies what a customer wants and thereafter develops a solution (product) to meet these requirements better than competitors but in a socially responsible manner. In the case of politics, the customer is the voter and the provider is the politician.

As local government elections is the talk of the day in today’s media, the typical needs of a Sri Lankan household are the timely collection of garbage, hygienic disposal of the dry and solid waste that will not pollute the neighbourhood, regular maintenance of road infrastructure, adequate street lighting, maintenance of children’s play grounds, etc., to name a few. In the recent past the cost of basic items like nadu rice, sugar, sprats, lentils and vegetables have also come into the key issues choice set that has become issues to the general public.

The candidate who can effectively communicate how these needs can be addressed better with their overall solution will garner the support to be voted in at an election, which incidentally is marketing at its best. It would not be incorrect to say that it is the discipline of marketing that brings democracy into a system.

The logic on the democracy ethos is that it is marketing that brings in democracy to a system for two reasons, the first being that the product/service that is offered by a candidate must communicated effectively in a manner so that the consumer is better informed on who best fits their requirement.

However, a point to note is that when communicating, this option must be available to every other competitor too with equal media time so that the Share of Voice is the same and the only competitive advantage is the message. The turnout at Galle Face on May Day was a classic example of democracy practiced in a country but sometimes too much democracy makes it impossible to govern is new findings of successful governments.

When marketing is wrong

Where marketing comes in for criticism is when marketing a candidate is done not in a socially acceptable manner. This includes blocking of media, below-the-line rivalry at meetings, voters not being allowed to vote, unlawful voting, etc., to name a few things which happen in many parts of Sri Lanka just like in any other developing country.

But a point to note is that this behaviour is not confined to political marketing but it happens across many consumer brands too, of which I have first-hand experience, which is an interesting parallel that many are not aware of.

The second point where marketing as a discipline draws flak is when used in politics, a candidate fails to deliver on the promise made after being elected. For instance, the collection of garbage daily and the recent dilemma in Meethotamulla were classic examples of not delivering on promises. This is the point that drives in an ethos where marketing a political candidate to high office can be considered unethical and wrong.

One way to correct this situation is just like the insurance or mobile phone industry of Sri Lanka. If a regulator can be asked play a more prominent role, major deviations can be corrected. This can include Share of Voice issues and maybe even the message content so that marketing unearths the true discipline that can be brought out to showcase democracy in a country.

Some can say that it is a farfetched idea in the case of political marketing but based on the best practices seen in other countries this can be achieved provided that there is a political will in doing so. The challenge is making it happen in a political economy especially in countries in the Asian and African regions.

The problem that can arise in the absence of a regulator when it comes to political marketing is that the candidate who is less aggressive will not be able to carve out a clear positioning in the minds of the voter, which in turn will result in the competitor doing this for him/her and that can lead to confusion in the minds of a voter. This is something that many less aggressive politicians fail to understand.

Maybe it is opportune to bring in a comparison between brand marketing and work done on a political candidate. When it comes to the latter one has a sense of urgency as only three months of views are available to drive up Top of the Mind (TOM) awareness and then carry it to the day of voting where one gets selected (purchase) or not.

On the other hand, the pace at which one needs to drive a brand will be at a slower pace as the time bar does not exist, unless the company wants to divest the category if a fast turnaround does not happen. This means that the ruthlessness of the tactics used in marketing a politician will be obviously different in velocity and breadth.

Another key difference is that brands can be switched by consumers if it does not meet their expectations overnight but in the case of political candidates the switching time can be as long as six years. This means the purchasing cycles are different. This further justifies the need for one to practice marketing so that it gives clarity on the decision that needs to be made at a polling booth.

Hence we see that in the next few months the focus will be on SOV = SOM = Market share movements on the political front. The bigger issue is, will the Government at play become more competent on the skill of marketing and delivery on the said promises? If the latter happens sometimes the SOV = SOM = Mkt share equation will work in favour. If not, one is giving into the competitor who happens to be very sharp and skilled in marketing.