The recent media highlighted the impact of communal violence on the tourism industry. The press conference earlier this week threw out a number as high as 10% whilst the actual cancellation was around 500 room nights around the Kandy vicinity was reported.

Whilst the actual impact will be seen in the near future, the incidents sure shocked the industry and took their minds back to the time when curfew was a daily occurrence prior to 2009. The blackout of Facebook and WhatsApp did not help the cause too. Whilst there can be merit for this decision internally, from a crisis management perspective it was against the grail.

From a marketer’s point of view, we come with the experience that if our brands are strong it can withstand any shocks that the environment throws out. From a tourism industry view we can take the case in point of Thailand.

The country attracts almost 30 million visitors a year, but if we Google Thailand security, the news is startling. Over 6,000 people have been killed since 2004.  If we take the near future, in 2015 the bombings inside the Eswaran Shrine killed 20 people and injured almost 200 people. In 2016, two bombs exploded in the tourism town of Hua Hin. One person died with 23 injured that included tourists. Last year a pipe bomb ripped a crowded street leaving 25 critically injured. On 22 January a motorcycle bomb exploded killing three people and dozens injured. If we take the press release of yesterday by the foreign office the wording is very clear: ‘Extreme caution must be made when travelling in Thailand as civil unrest, eminent terrorism attacks can be prevalent including Bangkok and places of highlight.’

But the question which is important to us in Sri Lanka is, how does Thailand attract 30 million visitors into the country with so many issues highlighted by the media?

The logic goes back to basics of human behaviour. If the positive stories that come out of a destination is higher as a share of voice (SOV) as against the negative vibes, then the attitude formation is more positively biased to the country. This leads to stronger behaviour such as more visits into the country. This is essential the reality of Thailand tourism.

If we track back to the strong equity of Thailand tourism, from a mere 81,000 visitors in 1960 today, there is over a 30 million coming into the country. Sri Lanka had around 19,000 tourists way back in 1966 whilst today we attract around two million. The question is, what has Thailand tourism done to develop such a strong brand globally with all the issues that have challenged this brand such as the 6,000 killings in the last 14 years?

The thinking is simple. Thailand Authority of Tourism (TAT) wants to be a top five destination to visit in Asia. This has a four-pronged strategy;

1) Develop infrastructure and logistics which link domestic tourism with international.

2) Develop and rehabilitate tourism sites and introduce clear guidelines which will enhance the countries potential for accommodating increased tourism.

3) Development of the creative economy with new products and services.

4) Keep the brand salience high and contemporary with the changing competitor landscape. 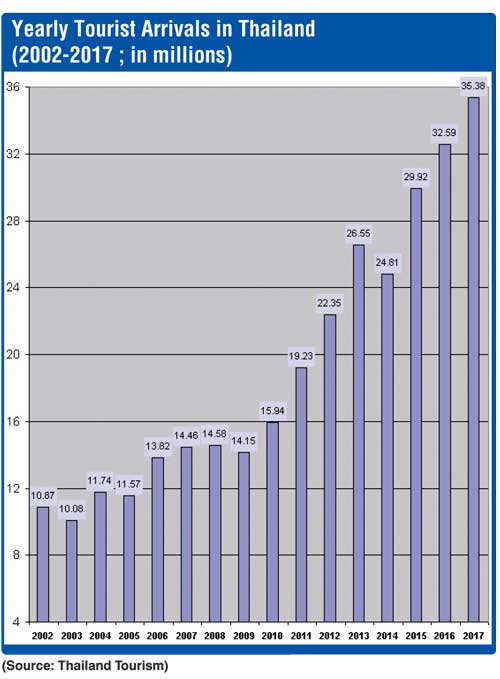 If we track back to the strong brands in the market, a clear thread that connects the best practice is ‘have a set of values around the brand’ and thereafter sustain this in the communication strategy over time, the logic being a clear identity in the market place. The stronger the coherence of the communication campaigns, the stronger the brand. This is the strength that helps a brand absorb any shocks that it faces in reality.

A classic example is the Fonterra brand Newdale in Sri Lanka. Even with all the issues it faced a few years ago on the product element, it was able to take the hit and bounce back quickly to win consumer demand pull from Sri Lankan housewives. This is the benefit of driving strong brand building.

If we track back on the brand building initiatives of Thailand, way back in 1980 Thailand launched its first-ever tourism campaign. It was called ‘Visit Thailand Year’. The campaign attracted two million tourists and made the industry the number one foreign exchange earner.

Once again in 1987, the campaign ‘Visit Thailand’ was relaunched to mark the 60th birthday of King Bhumibhol Adulyadej. It was once again made a strong impact on awareness and share of mind that attracted 3.4 million visitors as against the 2.8 million a year ago.

In 1998-’99, the world saw the launch of one of the best destination marketing campaigns themed ‘Amazing Thailand’ together with a strong private-public partnership. The campaign coincided with the 72nd birthday of King Bhumibhol Adulyadej and it was linked to the recovery process of the 1997 Asian currency crisis. The impact was significant with tourist arrivals crossing 8.5 million in number.

Thereafter in 2003 came the creative ‘Unseen Thailand’ which was a partnership project with Association of Thai Travel Agents, The Thai Hotels Association as well as Thai Airways. This was aimed at building a positivity post the SATS virus epidemic. Even though the industry numbers dropped by almost 10% the arrivals reached a number of 10 million which shows that strong brands can withstand shocks from the market.

In 2006, millions of people worldwide had the chance to witness Thailand’s many spectacles associated with the Royals. This included the Royal Barge Procession and the global communication campaign ‘Thailand Grand Invitation’. The year-long celebration attracted a record 13.8 million visitors into the country.

In 2007, with the celebration of the 80th birthday of King Bhumibhol Adulyadej, Thailand launched the campaign ‘Thailand Talk to the World’. The share of voice was able to attract 14.4 million tourists into the country which was an interesting dimension of simple communication creatively executed on a central theme.

Year 2010 saw the celebration of Thailand Tourism’s golden jubilee. The communication campaign was branded ‘Amazing Thailand Always Amazes You’. It was aimed at attracting visitors who have come to Thailand to once again come back to the country. It was a record breaking year with number crossing 22 million travellers by 2012.

By 2014, the Thailand Authority for Tourism had to move to communication based on a new insights that people make the difference in making an experience novel to a traveller. The campaign was themed ‘Amazing Thailand – It Begins with the People’. Even though the target was 26 million travellers, Thailand ended the year at 24.7 million at a growth of 19.6% as against the previous year, which was another record performance.

In 2015, Thailand did not rest on its laurels but launched another campaign called ‘Discover Thainess’. It included traditions and beliefs. Also included was Thai boxing and Wai kru dance as a way of life that helped get attention of the global traveller. The objective been to give a rub off the ‘Thainess’ feel to the world that was well received. The year ended at 29 million visitors. Year 2016 saw the launch of the ‘Quality Leisure Destination Thainess’ year where the focus was to promote Thailand as a ‘Quality Leisure Destination through Thainess’ where the Unique Selling Proposition (USP) was the Thainess campaign. The numbers shot up to 32 million and 2017 ended at an amazing 35 million, a feat which explains the power of the brand Thai Tourism even with all the issues faced with arson attacks, bombings and explosions that have killed over 6,000 people that includes tourists.

Whilst Sri Lanka is yet grappling to launch a global marketing campaign since 2015, the numbers have crossed from 0.5 million travellers to 2.01 million even with a positive environment. In my view, it is not the numbers but the quality of the tourists that matters, the logic being that the room-stock is increasing daily whilst the cost of living is increasing disproportionately and the industry is challenged to keep the brand alive.

The Thailand story is an example of how a strong brand can absorb the shocks that the environment throws out and also generate the footfall on tourism.

(The writer is a business personality and Board Director in the private and public sectors of Sri Lanka and former Chairman of Sri Lanka Tourism and Sri Lanka Export Development Board. He is an alumnus of Harvard Executive Education.)